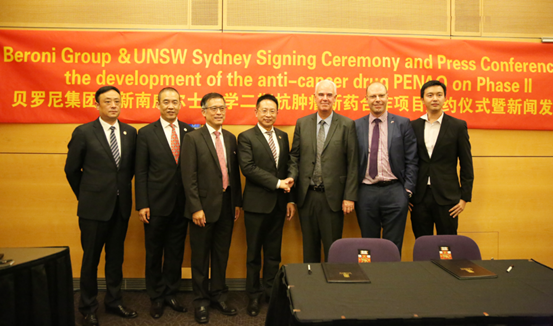 A picture of the representatives from Beroni Group and UNSW

On 28 March 2018, Beroni Group Limited (Beroni Group) & the University of New South Wales (UNSW) held the Signing Ceremony and Press Conference for the Phase II development of the anti-cancer drug PENAO at the Gallery Conference Hall of UNSW in Sydney. The signing ceremony was attended by the directors of Beroni Group; Boqing Zhang (Chairman), Peter Wong, Libing Guo, Hai Huang, and Nicholas Ong (Company Secretary); and by senior officials from UNSW; Professor Brian Boyle, Deputy Vice-chancellor of Enterprise, Warwick Dawson, Director of Knowledge Exchange at the Division of Enterprise, Professor Philip Hogg, Director of Cystemix, a subsidiary of UNSW and Professor Peter Gunning, Head of School of Medical Sciences, Faculty of Medicine, Lu Ping, Consul of the People’s Republic of China in Sydney. The co-operation will further promote the exchange of scientific research between China and Australia in the fields of biotechnology and life sciences.

Professor Philip Hogg and his research team have spent 10 years developing the anti-cancer drug PENAO. PENAO was first developed and tested in the UK. The drug has been found to reduce the size of the malignant brain tumour and control its growth.

As the first Chinese biotechnology company listed in Australia, Beroni Group regards the promotion of scientific cooperation in biotechnology between China and Australia as part of its mission. Its partnership with UNSW Sydney will help Beroni Group draw on medical expertise in Australia to explore more high-potential health development projects and to work toward converting the leading technologies in biotechnology and life sciences into useful products.

In his speech, Mr. Boqing Zhang, Chairman of Beroni Group mentioned that Beroni Group was the first biotechnology company from China to be listed in Australia on 12 May 2017. Since its listing, Beroni Group has been investing in the research and development of precision medicine, and has received international recognition and praise for its efforts. Beroni is pleased to be able to partner with UNSW to invest and support the development of the Phase II clinical trial of the new drug.

Through its access to the international capital markets, Beroni will  continue to invest in the development of new anti-cancer drugs and hopes to achieve a significant breakthrough in the prevention and therapy of cancer diseases, in order to benefit society and mankind.

Warwick Dawson shared the vision of Cystemix Pty. Ltd, a company set up for development of anti-cancer drugs. He said Cystemix has been studying various therapies for brain tumor patients. He hoped that Cystemix and Beroni Group would work together to develop a successful cure for brain tumour cancer. Professor Peter Gunning expressed that the Faculty of Medicine at the UNSW Sydney is not only committed to train medical talents but also promote the commercial transformation of medical technologies to benefit human health. Later, Professor Philip Hogg gave an introduction of the history and development plan of the anti-cancer drug PENAO. He believed that this new technology will continue to be improved and may soon be transformed into a new drug that can effectively control the growth of malignant tumors and reduce the suffering of cancer patients.

Lu Ping, Consul of the People’s Republic of China in Sydney attended this signing ceremony and wished the project will go on smoothly. Lu said, the collaboration between Beroni Group & UNSW is a good thing. He hoped that Beroni Group will break a new path in the fields of biotechnology and medicine and play a leading role in promoting scientific and technological cooperation and cultural exchanges between China and Australia.

Beroni Group plans to invest AUD 10 million in the PENAO project. The joint development effort between Beroni Group & UNSW will adopt an integrated research approach which includes basic research, high-tech research and clinical application of the use of the drug to fight brain tumour cancer.

Beroni Group and UNSW has agreed to work together to ensure the smooth progress of the development project and to periodically report on the results and achievements of the research. The project will be supported by the use of leading technology provided by the research team and cutting-edge medical research equipment, backed up by a strong capital reserve.  The project will bring significant benefits to the technology innovation initiatives undertaken by Beroni Group. The new product patent and the commercialization of the drug will improve the financial performance of Beroni Group and bring good returns to all its shareholders.