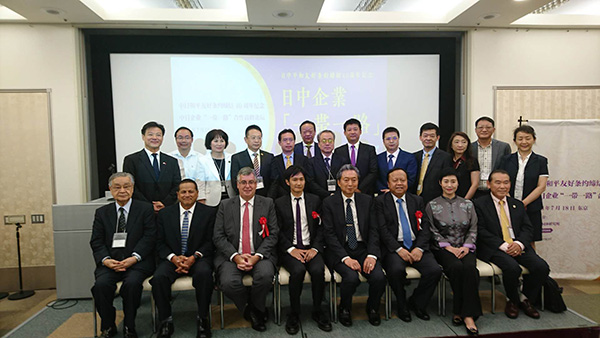 Tokyo-18th July, 2018, “Commemoration of the 40th Anniversary of China-Japan Peace and Friendship Treaty & “Belt and Road” Cooperation Forum for Chinese and Japanese Enterprises” was held at the Japan-China Friendship Conference Center. Many political representatives and business leaders from China and Japan attended the forum to discuss China-Japan cooperation and development in the fields of economy, science and technology, humanities and others over the 40 years since the signing of the China-Japan Peace and Friendship Treaty.

The forum was jointly sponsored by the East Asia Community Research Institute, Dacheng Law Firm, and VERYBEST Law Firm. The forum aims to provide a better platform for China-Japan friendship and cooperation, promote the cooperation between China and Japan and actively promote the peace and development in China, Japan and countries along the route. The forum is the largest one for Chinese and Japanese private enterprises in recent years, and is also the largest forum for the “Belt and Road” joint investment third party since the heads of China and Japan met in May this year. As the advocate and executor of the cooperation between China and Japan in the field of science and technology, Beroni Group was invited to participate in the forum.

Japan and China face each other across the sea, Japan has a unique position and role in the construction of the “Belt and Road”. In the economic and trade field, China is the biggest trade partner of Japan, Japan is China’s second largest trade target country and the third largest source of foreign capital. In the financial field, the two countries have achieved direct settlement of RMB and Yen. China and Japan focus on the cooperation priorities of the “Belt and Road” strategy, promote the development in five key areas including policy, infrastructure, trade, financial and people-to-people connectivity, which is not only conducive to the integration of interests and the improvement of bilateral relations, but also creates good conditions for the cooperation in various fields.

Mr. Yukio Hatoyama, the former Prime Minister of Japan and Chairman of the East Asian Community Institute was invited to attend the forum and gave a speech. In his speech, Yukio Hatoyama deeply analyzed that how the “East Asian Economic Community” fits into the “Belt and Road” strategy, which sparked the thinking of the attendees. Mr. Yukio Hatoyama introduced the classic quotations of The Analects of Confucius “Do as you would be done by”, “It is such a delight to have friends coming from afar”, and he pointed out that international cooperation between China and Japan should be follow the “benevolence” in the Analects of Confucius, people and countries should respect each other. Mr. Yukio Hatoyama is favour for the policy of the “Belt and Road” proposed by Chinese President Jinping Xi. He hopes that China and Japan will continue to cooperate friendly and take the advantages of both sides to make mutual benefit and seek deeper cooperation and development.

The forum also invited Mr. Qinglin Pan, Member of the 10th, 11th, and 12th National Political Consultative Conferences of China, the Standing Committee of the Chinese Federation of Returned Overseas Chinese, and the President of the Japanese Chinese Overseas Chinese Innovation Association, chief editor of the Japan New Overseas Chinese News and Japanese monthly magazine, the People’s Daily Overseas Edition, and Mr. Jinquan Xiao, Global Vice President of Dacheng Law Firm DENTONS gave keynote speeches. The above guests have made outstanding contributions to China-Japan cooperation in various fields. The forum  set up an discussion session, invited business leaders from various industries to talk about the political and trade development trends of China and Japan, international legal environment, as well as the business opportunities of comprehensive health industry  combining the future cooperation direction between China and Japan and the development trend of their specialized industries, striving to promote the exchanges and cooperation between China and Japan in various fields.

At the end of the forum, Mr. Boqing Zhang, Executive Chairman of Beroni Group invited Mr. Yukio Hatoyama, the former Prime Minister of Japan to attend “The Second Precision Medicine & Medical Care and Aging International Forum” jointly sponsored by Beroni Group and the International Cooperation Center of the National Development and Reform Commission and China Academy of One Belt and One Road Strategy. Mr. Yukio Hatoyama happily accepted the invitation and looked forward to the next friendly meeting.

Although China-Japan relations have experienced a tortuous period in political diplomacy, but China and Japan have made great efforts to promote exchanges and cooperation. Nowadays, China-Japan relations are developing in a positive direction, there are more comprehensive and broader cooperation space in economic and trade. During the forum, Chinese and Japanese companies conducted one-on-one negotiation, which promoted the cooperation between Chinese and Japanese companies, reflecting their huge cooperation needs.

The “Belt and Road” is a new starting point for cooperation between China and Japan, and a new opportunity for Beroni Group. Beroni will build a scientific and technological exchange bridge between China and Japan, comprehensively carry out research on the fields of “anti-cancer, anti-aging and medical care”, and endeavor to apply the research results to the clinic, providing practical treatment services for patients in China and Japan, and providing stronger support for human health and technological innovation. Beroni will actively cooperate with Japanese biological research institutions and medical institutions, promote comprehensive cooperation with Japan, then on this basis,build China’s ties with the Asia-Pacific region and other neighboring countries, and carry out cooperation in Greater China, ASEAN, India and Middle East to promote the implementation of the “Belt and Road” strategy and economic and trade exchanges among relevant countries.