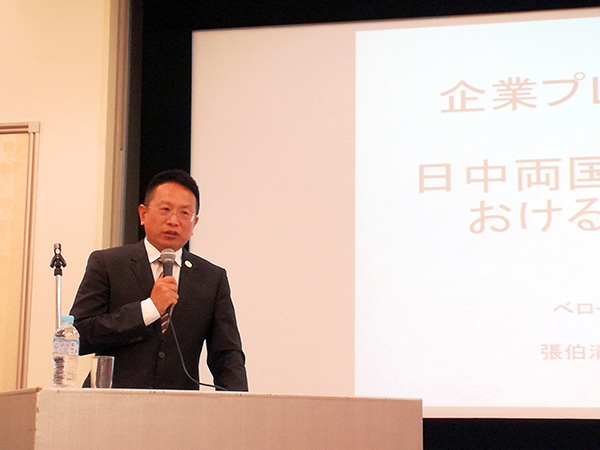 This year marks the 40th anniversary of the China-Japan Peace and Friendship Treaty and the 40th anniversary of China’s reform and opening up policy. Nowadays, Sino-Japanese relations are friendly and developing positively. Over the past 40 years, China and Japan have published four political documents, continuously enriched the basic principles and spirit of developing bilateral relations. Although Sino-Japanese relations have undergone complicated, tortuous and severe tests, the cooperation in various fields between the two countries has developed for a long time. Nowadays, Sino-Japanese relations are in the period of fastest-growing, changing and bringing the most benefits to the people of the two countries and Asian countries. The peaceful and friendly cooperation between China and Japan is the current trend. Over the years, China and Japan have adhered to the principles and spirit of the four political documents, continued to develop strategic and mutually beneficial relations between China and Japan, continuously improved the level of pragmatic cooperation, promoted the improvement and development of bilateral relations in the right direction, and brought important opportunities for the cooperation between the two countries.

The “Belt and Road” is the abbreviation of “Silk Road Economic Belt” and “21st Century Maritime Silk Road”. On 7th September, 2013, President Jinping Xi made an important speech at the Nazarbayev University in Kazakhstan entitled Promoting People’s Friendship for a Better Future and proposed the “Silk Road Economic Belt” initiative for the first time. On 3rd October of the same year, President Jinping Xi delivered an important speech entitled Working Together to Build China-ASEAN Destiny Community in the Indonesian Parliament, and firstly proposed an initiative to jointly build the “Maritime Silk Road” in the 21st century.

Japan and China face each other across the sea, Japan has a unique position and role in the construction of the “Belt and Road”. In the economic and trade field, China is the biggest trade partner of Japan, Japan is China’s second largest trade country and the third largest source of foreign capital. In the financial field, the two countries have achieved direct settlement of RMB and Yen. China and Japan focus on the cooperation priorities of the “Belt and Road” strategy, promote the development in five key areas including policy, infrastructure, trade, financial and people-to-people connectivity, which is not only conducive to the integration of interests and the improvement of bilateral relations, but also creates good conditions for the cooperation in various fields, especially in the fields of science and technology and health, there are huge opportunities and broad prospects between China and Japan.

In the 19th National Congress of the Communist Party of China, Jinping Xi pointed out that China is in the critical period of transforming its development mode and must focus on accelerating scientific and technological innovation. Developing a healthy China and healthy industry have become important measures. Faced with the problem of the aging of the world’s population, China will strengthen its population development strategy research in the future, promote the development of medical care, and accelerate the development of age care industry.

Japan’s research ranks among the world’s most advanced in the field of comprehensive health. Beroni Group hopes to take advantages of advanced bioscience technology to promote the transformation of scientific and technological innovation between China and Japan. Innovation is the first driving force for development. As a self-innovative biotechnology enterprise, Beroni Group defines “scientific innovation and development” as a key factor in enhancing its core competitiveness, and uses advanced bioscience technology to produce a variety of health and technology products to contribute to the development of international health industry. At present, Beroni’s business mainly involves biotechnology, life sciences, environmental science and governance, precision medicine, regenerative medicine, genetic testing, and stem cell anti-cancer and anti-aging projects. With the listing on the National Stock Exchange of Australia, and dual-listing on the Frankfurt Stock Exchange, Beroni’s global layout has gone further.

Beroni always believes that there are many opportunities for cooperation between China and Japan in the field of science and technology. More than 50,000 Japanese companies have invested in China, and Chinese companies have also maintained rapid growth in their investment in Japan. Beroni Group is the main force of Sino-Japanese friendly cooperation. In recent years, Beroni has seized the opportunities of the development of Sino-Japanese health industry, has cooperated with Dendrix. Inc, a company having high-quality production R&D institutions and service teams in immune cell therapy to conduct long-term cooperation in the fields of precision medicine, difficult and complicated diseases and stem cell anti-aging. It has also acquired Medicine-Plus Co., Ltd, a pharmaceutical company based in Osaka, Japan.

We have actively carried out cooperation with Japanese biological research institutions and medical institutions, which have made great progress. But that is just the beginning. In the future, Beroni will continue to promote the cooperation with Japan, then on this basis, build China’s ties with the Asia-Pacific region and other neighboring countries and carry out further cooperation in Greater China, ASEAN, India and Middle East .

The “Belt and Road” is a new starting point for cooperation between China and Japan, and a new opportunity for Beroni. Beroni will fully promote the exchange and integration between China and Japan in the fields of science and technology, humanities, education, economy, trade, energy, medical care and safety supervision. In the field of science and technology, Beroni pays great attention to the “school-enterprise combination” model, advocates using the capital market for global financing, and promotes the transformation of basic scientific research and innovation achievements in universities. With this model, Beroni has been successfully cooperated with the University of New South Wales in Australia and Columbia University in the United States. I know that cooperation with well-known Japanese universities requires the combining of Japanese local environment and culture. Japanese culture and Chinese culture have many things in common. In the comprehensive planning of “talent sharing, technology sharing, and resource sharing” between China and Japan, I believe that Beroni will open a broader platform for cooperation. Beroni will also build a scientific and technological exchange bridge between China and Japan, and comprehensively carry out research on the fields of “anti-cancer, anti-aging and medical care”, and endeavor to apply the research results to the clinic, providing practical treatment services for patients in China and Japan, and providing stronger support for human health and technological innovation.

Finally, I am very grateful to all the guests, thank you all for your acknowledgement and recognition of Beroni Group. Beroni Group will actively carry out Sino-Japanese international cooperation, promote technological innovation in the field of “biotechnology, life sciences”, enhance the its strength, and commit to research and innovation in the field of precise medicine, and strive to develop more medical technology and products in the field of biotechnology and life sciences. Health is borderless, and technology is borderless. I wish the forum enables China and Japan to cooperate well with the “Belt and Road” strategy and look forward to the “China-Japan Belt and Road” strategy can contribute to world peace and prosperity. At the same time, Beroni Group will do its best to promote Sino-Japanese friendly relations.