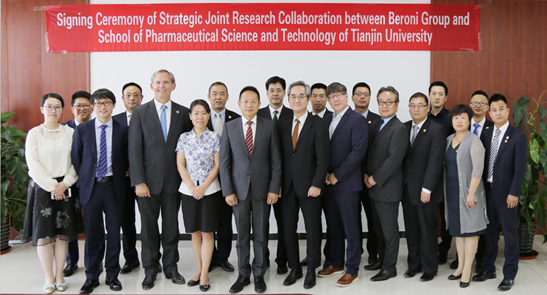 The School of Pharmaceutical Science and Technology of Tianjin University is a high-quality, high-standard teaching and research team which is led by academic leaders with a world vision. The School always keeps pace with the international developments in the pharmacy industry and makes full use of its advanced scientific research equipment for the new developments. It has carried out a number of advanced level scientific research projects at home and abroad, successfully promoted the transformation of scientific achievements and has accumulated rich practical experience in the development of cutting-edge research projects and construction of scientific and technological innovation platforms.

On behalf of School of Pharmaceutical Science and Technology, Tianjin University, Mr. Jay S. Siegel, Dean of SPST of Tianjin University, also a world famous scientist, signed the cooperation agreement. Mr. Jay S. Siegel who received his Ph.D. degree from Princeton, was the head of the Faculty of Science at the University of Zurich, Switzerland. He is now the Dean of School of Pharmaceutical Science and Technology and School of Life Sciences of Tianjin University being the first and the only one foreigner faculty head in Tianjin University in the past 60 years. Professor Jay S. Siegel published a total of more than 200 articles, including 5 in Science, 3 in Nature, 1 in Nature Chemistry. His article has been cited more than 10,000 times. He has been invited by internationally renowned scientific research institutions and industrial enterprises to make speeches for more than 300 times. Professor Jay S. Siegel is a winner of German Humboldt Research Award, and the chief scientist of the National Basic Research Program (973 Program). He has won the China Government Friendship Award, the annual figure of “Foreign Education in China” and the most influential foreign expert in China’s 40 years of reform and opening up. With his direction, the School of Pharmaceutical Science and Technology has successfully applied for the “International Model Academy” project jointly launched by the State Administration of Foreign Experts Affairs and the Ministry of Education, becoming the one of four approved schools in China.

Professor Jay S. Siegel said at the signing ceremony, “it’s the beginning of the partnership between Beroni Group and our School of Pharmaceutical Science and Technology. I’m looking very much forward to work together with Beroni Group. Our School is an internationally focused organization in China, and Beroni Group with its international business is a perfect match. We hope to work well to bring good outcome and mutual benefits.”

The Executive Chairman of Beroni Group, Jacky Zhang said: “We are very happy to sign this joint research collaboration agreement with the School of Pharmaceutical Science and Technology of Tianjin University. Our company currently has presence in USA, Japan, Hong Kong, China, and Australia. We hope we can have more collaboration with Tianjin University, and have many opportunities to conduct joint research and development programs.”

The signing ceremony was also attended by a number of specialists in the field of biotechnology. The guests had an intensive discussion on “cross-border development in the field of health”.

The two sides deeply agree with the development model of “combination between school and enterprise”. Ms. Feng Cuiling, the secretary of SPST said, “As a university, cultivating talents is the first work and the responsibility that the school have always assumed. Industry-university- research cooperation is a cooperative model supported by the state, which can effectively promote the development of universities and enterprises, accelerate the development of scientific research, so that to serve the society.”

The collaboration will promote the Group’s development in scientific research innovation field, it will be conducive to planning and coordinating innovative resources for industrial and technological integration, and building a technological innovation platform based on basic scientific research and build an international and high-level talent team.

Beroni Group will take the advantages of international resources to comprehensively enhance its ability to gather resources with international universities in scientific research field, carry out scientific and technological collaborative innovation work on the international platform to strengthen “Beroni Group Global Scientists Alliance for Precision Medicine”, and lay a solid foundation for global collaborative innovation. By comprehensive and in-depth and efficient cooperation mode, the Group will achieve more substantive results and promote high-quality development in the field of biotechnology.