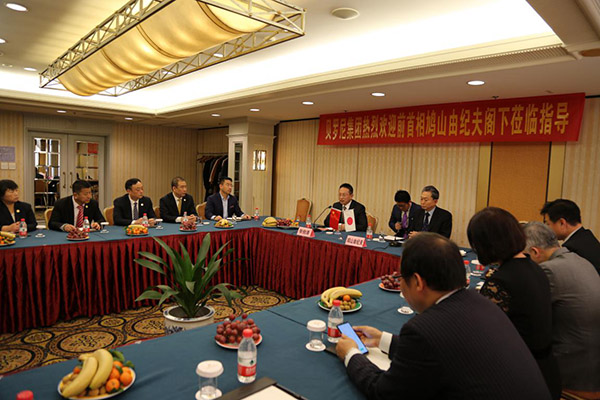 On the morning of 15th March, 2018, Zhang Boqing, chairman of the board of Beroni Group invited Yukio Hatoyama , the former Prime Minister of Japan to attend guidance discussion at Beijing Changfugong Hotel. Meanwhile, Guo Jianfeng, the research fellow of B&R Institute of International Cooperation Center of National Development and Reform Commission, members of the board of Beroni Group and top managers of Beroni Group attended this discussion.They discussed the cooperation between China and Japan in precision medicine and medical care, as well as the overview of China’s B&R project.

Zhang Boqing, chairman of the board of Beroni Group, hosted the discussion. He said: “Beroni Group was very honored to invite Yukio Hatoyama to attend The First Precision Medicine & Medical Care Aging International Forum held in December, 2017. Yukio Hatoyama’s wonderful speech on the forum has still been remembered by us. We have a deeper understanding of “fraternity” advocated by the Yukio Hatoyama and we are very grateful for his renewed visit to guide our work.”

During the discussion, Zhang Boqoing introduced the development of Beroni Group. After dual listing on FSE, Beroni has a deeper understanding and planning of the global capital market layout and will take a step on the research of precision medicine. In the future, Beroni Group will continue to cooperate with more outstanding biotechnology companies in the fields of precision medicine and medical care, and steadily improve the company’s scientific research and innovative capabilities, commercialize its top technologies into products.

After listening to Zhang’s speech, Yukio Hatoyama fully affirmed the development plan of Beroni Group and congratulated Beroni Group on its listing on FSE. He said, China’s long-term adherence to the one-child policy may face the phenomenon of population aging which will directly brings serious challenges to the Chinese social and medical industry in the near future. Therefore, it is particularly important and prominent to carry out research in the field of precision medicine and medical care. Beroni Group has firmly grasped the vital development opportunities in the health industry, its future will be promising. Japan that has entered the development of the medical and health care industry firstly, will certainly bring more lessons to China. He hoped that Beroni Group will promote the sincere cooperation between China and Japan in the field of medical care and precision medicine with the spirit of fraternity, produce more valuable products to help patients alleviate and get rid of the pain of diseases and contribute to human health.

“Belt and Road” has been a hot topic at home and abroad. Beroni Group invited Guo Jianfeng, the research fellow of B&R Institute of International Cooperation Center of National Development and Reform Commission to attend this discussion. During the discussion, Professor Guo shared the implementation plan of the B&R project in the international areas, and invited Yukio Hatoyama to give valuable suggestion.

In Yukio Hatoyama’s opinion, the proposal of B & R is beneficial to all countries and it has effectively promoted cooperation between China and the countries along the routes in the fields of diplomatic, political, which is good for the long-term stable development of the world economy. He stands for China Japan Korea Free Trade Agreement and hopes that the B&R project can not only was conducted in the three countries, but also in 10 ASEAN countries and other 16 Asia-Pacific countries. At the same time, he hopes that all countries will abide the international principles of peace and fraternity, avoid disputes of interests, and advocate the spirit of mutual benefit, which will enable the B&R project develop well on the international stage.

Yukio Hatoyama’s speech received warm applause. The participants deeply agreed with the spirit of “fraternity” advocated by Yukio Hatoyama, and they looked forward to the powerful influence the B&R project can promote the peace and friendship among all countries in the world.

Precision medicine, medical care, and regenerative medicine are the most popular research disciplines in China’s health industry and have a bright prospect.  At the same time, Beroni will also continuously produce better products to promote human health, and try its best to achieve global cooperation and global win-win with the idea of “fraternity”.