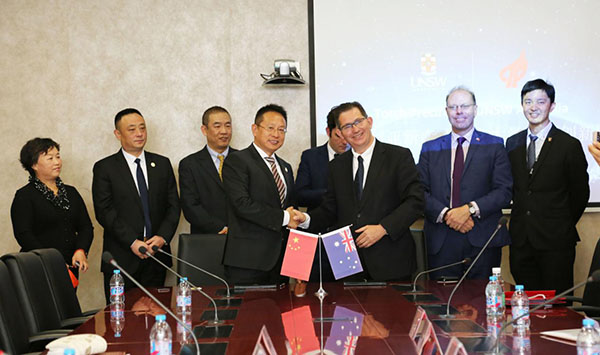 A picture of Mr. Zhang Boqing, the chairman of Beroni Group and Ian Jacobs, the principal of University of New South Wales

This is a a great advance for Beroni Group after listing on National Stock Exchange of Australia. Beroni Group has been deeply involved in Australia in the field of biotechnology and life sciences and has made a substantial progress.

The chairman of Beroni Group, Mr. Zhang Boqing said, it was his honour to attend to this round-table conference and witness the technological achievements in 2017. The University of New South Wales is a leading research-intensive university in the Asia Pacific region. It has a strong competitiveness in technological studies and has achieved remarkable results in biological medicine and life sciences. Scientific and technological innovation is the core idea both of Beroni Group and the University of New South Wales. Beroni Group hopes that through the cooperation to work together for the development of biotechnology innovation in China and Australia.

During the conference, Beroni Group signed a strategic cooperation agreement with University of New South Wales successfully. Beroni Group plans to invest the Phase II clinical study of brain anti-neoplastic drugs to promote the project of biomedical research and development. Mr. Zhang Boqing said, technological innovation is the core objective of two parties. He expected that they can contribute to human health together by transforming science and technology into products.

The International Symposium for Infection & Immunity will be held

The International Symposium for Infection & Immunity was held successfully