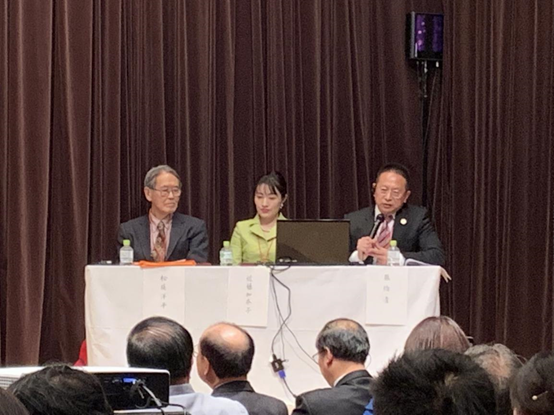 I’m Jacky Zhang, Executive Chairman of Beroni Group. I am very honored to be invited to attend the “B&R and Building a Community with Shared Future for Mankind Forum”. Thank Your Excellency Yukio Hatoyama for his invitation, and sincerely wish the forum a complete success.

The “Belt and Road” is the abbreviation of “Silk Road Economic Belt” and “21st Century Maritime Silk Road”. On 7th September, 2013, President Jinping Xi made an important speech at the Nazarbayev University in Kazakhstan entitled Promoting People’s Friendship for a Better Future and proposed the “Silk Road Economic Belt” initiative for the first time. On 3rd October of the same year, President Jinping Xi delivered an important speech entitled Working Together to Build China-ASEAN Destiny Community in the Indonesian Parliament, and firstly proposed an initiative to jointly build the “Maritime Silk Road” in the 21st century.

The Belt and Road Initiative meets the common needs of countries involved in this initiative and provides opportunities for complementary and open development of them. It is a new platform for international cooperation. The initiative proposes that the countries along the silk road will work together to create the “community of interests” and “community of common future” for equality, mutual benefit, cooperation and win-win, and jointly build a “community with shared future for mankind”.

Over the past 40 years of reform and opening up, China has achieved great achievements and has accumulated rich experience, giving an example for other countries around the word. With the principles of “friendly cooperation, openness and tolerance, mutual learning, mutual benefit and win-win”, the Belt and Road Initiative will promote cooperation between China and countries along the route in transportation infrastructure, trade and investment, energy cooperation, regional integration, and internationalization of the RMB.

The Belt and Road Initiative is an important path for friendly exchanges between China and countries involved in this initiative. It advocates cooperation under the equal cultural identity and reflects the spirit of  “understanding, tolerance, cooperation and mutual benefit”. With the theme of “B&R and Building a Community with Shared Future for Mankind”, the forum reflects the high sense of identity between China and Japan on the Belt and Road Initiative, as well as the understanding and tolerance of cultural differences. With the joint efforts of China and Japan, the Belt and Road Initiative is turning from conception to reality. The two countries are gradually working together in the fields of trade and investment, science and technology cooperation, energy and resources, financial security, and co-developing third-party market that have made great progress.

I believe that the “B&R and Building a Community with Shared Future for Mankind Forum” can provide a broader and more comprehensive development platform for the friendly cooperation between China and Japan. The two countries can take their strengths and advantages to exchange and cooperate, learn from each other, and actively establish cooperative partnership in the fields of science, technology, culture and economy, to create a “community with shared future for mankind”.

I am very grateful for Your Excellency Yukio Hatoyama’s support to the Belt and Road Initiative and for his contributions to economic cooperation and scientific and cultural exchanges between China and Japan. Your Excellency Yukio Hatoyama also expressed his appreciation for Confucianism, agreed that “the man of virtue, while establishing himself and pursing success, also works to establish others and enable them to succeed as well” in the Analects of Confucius. I deeply agree with the spirit of fraternity advocated by Your Excellency Yukio Hatoyama. While we are seeking survival and development, we should help others to survive and develop. We cannot neglect others just to satisfy our own desires, and we cannot sacrifice the interests of others to seek own  development. That is the embodiment and sublimation of the spirit of fraternity. Fraternity advocates the spirit of mutual benefit, which can promote the Belt and Road Initiative to develop more smoothly on the international stage.

As a company focusing on multinational high-tech exchanges, it is a great honor to get the exchange opportunity under the environment of “encouraging cross-border cooperation in the world”. Beroni Group will cherish the current friendly and inclusive international environment and seize development opportunities, exchange and cooperate with more countries.

China has been implementing the “Healthy China Strategy”. Developing healthy industry have become important measures. Faced with the problem of the aging of the world’s population, China will strengthen its population development strategy research in the future, promote the development of medical care, and accelerate the development of age care industry. Japan’s research ranks among the world’s most advanced in the field of health-care. Beroni Group hopes to promote the scientific and technological exchanges between China and Japan in the field of health, take advantages of advanced bioscience technology to develop the projects in health area in China and Japan.

The Belt and Road Initiative has promoted the cooperation between China and Japan in the field of health. The exchanges between China and Japan in health policy, medical research, personnel training, and pharmaceutical trade have been developed and promoted. The cooperation in the prevention and control of infectious diseases, monitoring of chronic diseases, health emergency, maternal and child health, and traditional medicine have also benefited more and more people.

More than 50,000 Japanese companies have invested in China, and Chinese companies have also maintained rapid growth in their investment in Japan. Beroni Group is the supporter of Sino-Japanese friendly cooperation. In recent years, Beroni has seized the opportunities of the development of Sino-Japanese health industry, has successively cooperated with Dendrix. Inc, a company having high-quality production R&D institutions and service teams in immune cell therapy to conduct long-term cooperation in the fields of precision medicine, difficult and complicated diseases and stem cell anti-aging. We are also acquiring Medicine-Plus Co., Ltd, a pharmaceutical company based in Osaka, Japan.

Beroni Group have actively carried out cooperation with Japanese biological research institutions and medical institutions. We have the latest technical support in the field of medical and health in Japan. But that is just the beginning. In the future, Beroni will continue to promote the cooperation with Japan, then on this basis, build China’s ties with the Asia-Pacific region and other neighboring countries and carry out further cooperation in Greater China, ASEAN, India and Middle East.

We will try our best to build a scientific and technological exchange bridge between China and Japan, and comprehensively carry out research on the fields of “anti-cancer, anti-aging and medical care”, and endeavor to apply the research results to the clinic, contributing to health industry in China and Japan.

I was entrusted by President Shouji Lu and Mr. Wang Ru from The Silk-road Industry and Finance International Alliance to express their gratitude to Your Excellency Yukio Hatoyama. At the same time, I hereby invite Your Excellency Yukio Hatoyama and all guests to participate in “The Third Precision Medicine & Medical Care and Aging International Forum” jointly sponsored by The Silk-road Industry and Finance International Alliance.

Finally, I wish the forum a complete success, and look forward to the Belt and Road Initiative can contribute to world peace and prosperity. Beroni Group will do its best to promote Sino-Japanese friendly relations. Congratulations on the success of the forum!

Tianjin Association of Science and Technology’s Visit to Beroni Group