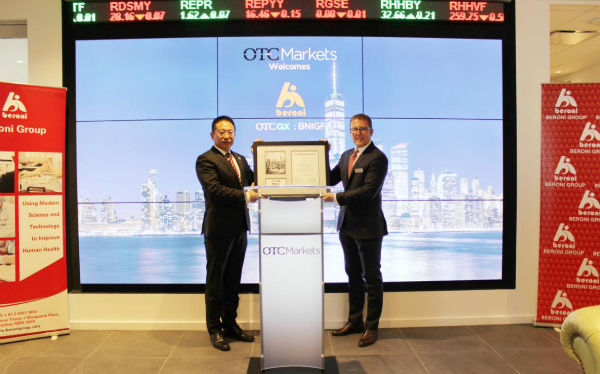 Executives, business partners and friends of Beroni Group attended the commencement of trading ceremony on Monday 29 April 2019 at the OTC Markets office in New York. The group was welcomed by Jason Paltrowitz, Executive Vice President of Corporate Services at OTC Markets Group who congratulated Beroni Group as the first company from the National Stock Exchange of Australia to be traded on OTCQX. He is confident that Beroni Group will benefit from the increased visibility, increased share tradeability and increased awareness of its brand in the U.S. public market.

Jacky Zhang, the Chairman and CEO of Beroni Group said “The commencement of trading of Beroni Group on OTCQX will be remembered as a significant milestone in the history of the Company. The OTC markets is a huge capital market with 10,000+ companies being traded on this platform. Having a trading presence on OTCQX will give us access to the U.S. and international investors. We believe that Beroni Group now has a good opportunity to use this platform to raise funds for our international research projects which focus on promoting technology collaboration, innovation and transformation. In addition, having a presence in the U.S. capital market will support our vision to be a leading biotechnology company in the world that is committed to improving the human health.”