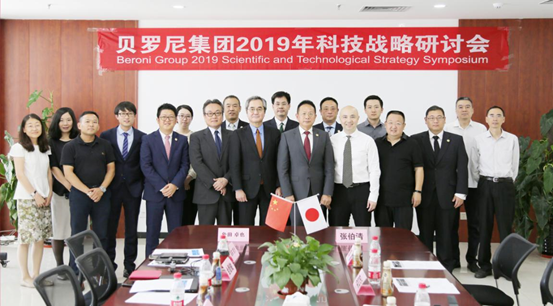 Mr. Jacky Zhang, Executive Chairman of Beroni Group in delivering his keynote speech said: “Through a series of strategic deployments, Beroni Group has carried out a number of projects in Australia, USA, Japan, and China. We also have made progress in connecting with the global capital markets every year. Beroni Group is collaborating with internationally renowned universities, which has strengthened Beroni’s scientific research team and promoted its global business development efforts. Beroni Group will continuously use the capital markets to provide strong financial support for its research projects.

Mr. Takuya Tsunoda, Professor of Medical Oncology, Showa University, Japan gave a talk on Immunotherapy for Cancer. He said: “Immunotherapy target the immune system not the cancer. Immunotherapy can effectively slow down the pathology and spread of cancer. With the rapid development of medical science, cancer will not be looked upon as a life-threatening disease but just a chronic disease.”

Mr. Michael Yuchi, associate professor from SPST gave a speech entitled Application of Structural Biology and High-throughput Drug Screening in Developing Ion Channel Drugs. He introduced the distribution of ion channels and physiological functions and the diseases associated with ion channels. He also said, “Ion channels are widely used. In addition to the application in research of disease molecular diagnosis, they can also be used in daily life, such as the development of green pesticides which can help kill crop pests.”

Mr. Hui Guo, professor from Institute of Biophysics, Chinese Academy of Sciences made a speech entitled New Techniques for the Design and Development of Antibody Therapeutics. He said: “The era of biomedicine has arrived, and the world’s antibody drugs for rheumatoid arthritis, lymphoma and breast cancer have been successfully transformed and have benefited patients. We are working on designing, constructing and screening specific antibodies, bispecific antibodies and bifunctional antibodies for specific disease targets using novel antibody fusion technologies and optimizing their structure.”

Dr. Qian Chen, Chief Scientist and Co-founder of ThorGene (Beijing) Medical Technology Co., Ltd talked about Instrumentation, Services and Drug Development Based on Genetic Analysis Technology. He said: “With the growth of China’s population and the growth of the aging population, the demand for anti-cancer drugs and in-vitro testing is increasing, which is driving the development of genetic analysis technology. Our team aims to help patients fight cancers by improving the development of gene detection by working on gene detection services including developing testing equipment and targeted drugs.”

Dr. Yu Wang, researcher of R&D Center for Precision Medicine of Beroni Group made a speech entitled Renin Angiotensin System and Cancer. He shared current progress, future directions and collaboration of two Beroni Group projects. One is the repositioning of existing anti-hypertensive drugs as an ubiquitous adjunct therapy for the treatment of solid tumors, another one is the development of the first antagonists against the (pro)renin receptor for the management of cancer, diabetes and cardiovascular related diseases.

In addition to giving technical speeches, the specialists were engaged in in-depth discussion of their respective speech topics.

At the symposium, Beroni Group has signed a strategic joint research cooperation agreement with SPST, Tianjin University and also has signed a letter of intent for strategic cooperation with Professor Takuya Tsunoda from Showa University. SPST has strong scientific research strength as it has carried out numerous advanced level scientific research projects at home and abroad. Professor Takuya Tsunoda and his team of Medical Oncology has made a number of great achievements in immunotherapy for cancer and developing anti-cancer new drugs. Cooperating with them will bring new opportunities for Beroni Group’s scientific and technological innovation work.

The symposium was a great success. On the one hand, it has provided an academic exchange platform for the scientists to share research results, practical experience, and ongoing projects particularly in summarizing the latest academic achievements on molecular diagnosis, early tumor screening, and developing new cancer drugs. On the other hand, it has provided a platform for connecting basic scientific research with business enterprises and brought new cooperation opportunities in scientific methods and projects. Beroni Group will continue to hold the Scientific and Technological Strategy Symposium on a regular basis in order to build a bridge for communication and cooperation for the global scientists, enhance Beroni Group’s international technology skills and expertise, encourage communication and connection between scientific experts and biotechnology companies and promote the industrialization and practical application of academic achievements.

Major Events of Beroni Group in 2018