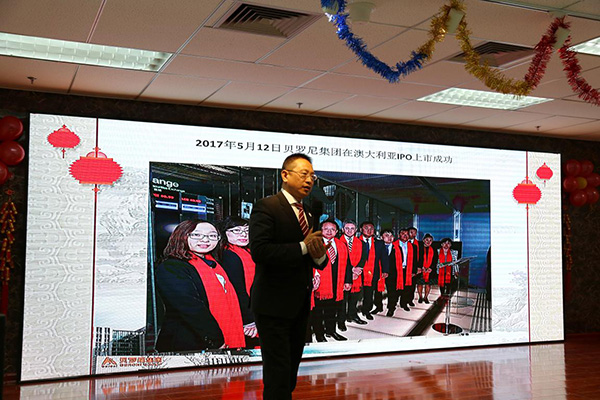 On 11th February 2018, Beroni Group held 2017-2018 Annual Work Summary Meeting ＆ New Year Celebrating Party, all managers and staff attended this meeting and had a good time at the party.

At the beginning of the annual meeting, all participants reviewed the development history of Beroni Group in 2017. During this year, Beroni Group completed listing in NSX and became a member of CRCNA. Meanwhile, the internationalization of the Beroni Group has also been accelerating steadily with a series of cooperation with international organizations such as Columbia University in the United States, Dendrix Corporation in Japan and Nankai University in China. Also in this year, Beroni Group successfully held “The First Precision Medicine & Medical Care Aging International Forum” and established “Global Union of Scientists” including domestic and foreign scientists，which lays a solid foundation for the development of the Group.

After reviewing the development history of Beroni Group in 2017. Mr. Zhang Boqing, the chairman of Beroni Group was deeply touched, he said, Beroni Group not only formulated a series of business strategies, but also made them come true in 2017, that owed to everyone who supports and works hard for Beroni Group. At last, he also expressed his best wishes to everyone for Chinese New Year.

At the annual meeting, all the participants gave multiple brilliant performances. Besides, there is lucky draw time or game time between two performances. That’s very exciting. This annual meeting not only brings pleasure to everyone but also makes each other more intimate.

Beroni Group made noticeable progress in 2017. Now, we are stepping into 2018. It will be a year of hopes and challenges. In the future, all the members of Beroni Group will grow up with the company and try their best to create a “better tomorrow” for Beroni Group.

The International Symposium for Infection & Immunity was held successfully